← back to
HELLS HEADBANGERS Records & Distribution

Light the Candle In Honour of Devils 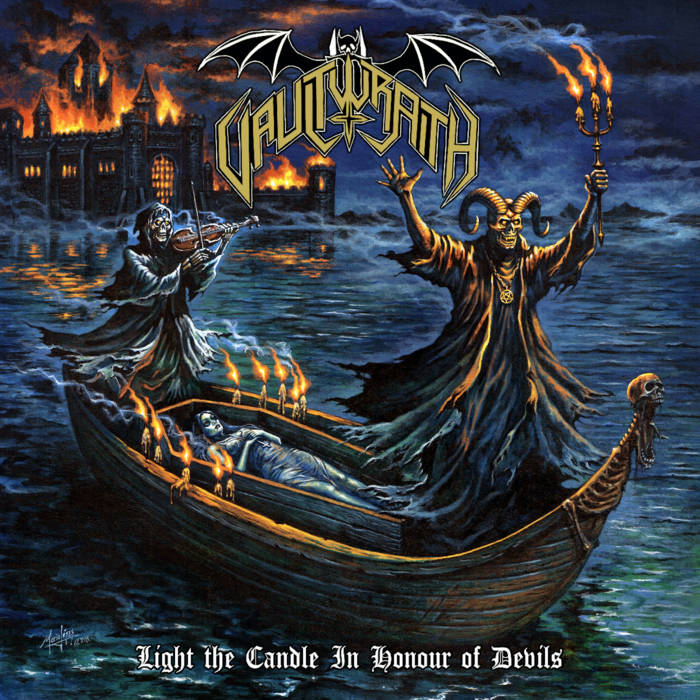 HELLS HEADBANGERS is proud to present VAULTWRAITH's highly anticipated second album, "Light the Candle In Honour of Devils," on CD.

"Light the Candle In Honour of Devils" is a 12-song epic of pure Devilcraft Metal: VAULTWRAITH's own morbid mix of heavy '80s-inspired speed/thrash metal, combined with demonic death/black metal riffs/vocals, atmospheric horror-inspired keyboards, and a King Diamond/Candlemass-influenced vibe of evil and doom.

VAULTWRAITH's debut album for HELLS HEADBANGERS, 2017's "Death is Proof of Satan's Power," was a surprising and original success with lethal critical praise from the horror and metal underground, including England's Metal Hammer, who spread the word like deadly metallic fire with a scribe of sheer enthusiasm for the band and album: "From its dazzling artwork to the bewitched insanity of the lyrics, Death Is Proof Of Satan’s Power strides proudly through extreme metal’s schlockiest outreaches and feels almost guaranteed to delight anyone who owns Suspiria on Blu-ray and listens to King Diamond on a regular basis. This is a gruffer, less-polished affair than the great Dane would favor, however, and while there are endless, ghoulish hooks to enjoy, VAULTWRAITH's sound is driven along by a filth-ridden blackened thrash undertow, redolent of Usurper at their thuggish best. Songs like 'Ravaged In The Crimson Mist' and 'High Priestess Of The Wolf Coven' play out like hi-def snapshots of movie-inspired nightmares. More importantly, it’s heavy as hell, metal to the bone, and one of the finest underground releases of late. Satan demands you check it out"

With their second album due out in 2019, again through HELLS HEADBANGERS, VAULTWRAITH's Light the Candle In Honour of Devils continues the sound and feeling of the debut but going in a much darker direction, cranking up the death metal, black metal, and doom while keeping the lightning thrash metal sound, altogether taking their love of atmospheric European horror literature, film, and art to further heights and gloomy dimensions.

A loose storyline connects the first album with the second album in a clever and yet darkly passionate way, with each song telling a different tale of various characters from the past trapped in their own hellish nightmares, with murder, warlocks, witch-burnings, cursed nuns, and occult burials ready to explode in an inferno of utter vengeance and damnation. The VAULTWRAITH has RETURNED!

After a very cult underground split 7" EP with their mentors-in-evil NUNSLAUGHTER, and an upcoming split 7" EP with their blood-brothers in horror ACID WITCH (also due out on HELLS HEADBANGERS), the undead witch and warlocks of VAULTWRAITH are prepared for the underground to revel once again in their brand of original and highly infectious Devilcraft Metal with the thundering hooves and macabre-shreddings of Light the Candle In Honour of Devils!